In Los Angeles: Mother Arrested for Killing her Three Children

Kenya’s Eliud Kipchoge, 33, has set a new marathon world record with a time of two hours, one minute 39 seconds in the race over the distance in Berlin.

He took more than a minute off the previous best which was set by compatriot Dennis Kimetto when he ran 2:02:57 in Berlin in 2014. 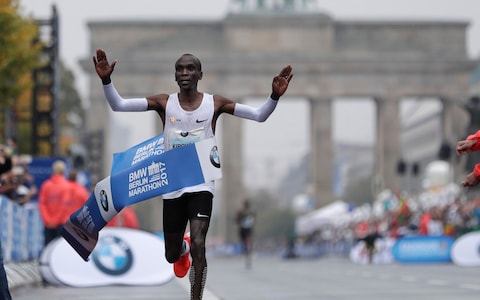 “I lack words to describe this day. I am really grateful, happy to smash the world record,”said Kipchoge

Berlin Marathon had initially given his unofficial time as 2 hours, 1 minute and 40 seconds, then adjusted it by one second.

“The winning time is now official and another second faster: 2:01:39 for Eliud Kipchoge!” it said.

In June, Kipchoge said his focus was on winning the Berlin Marathon.

“My preparation is entirely concentrated on the BMW Berlin Marathon on September 16,” he said. “I am confident I can beat my personal best on this fast course if conditions are good.”

The women’s race was won by Gladys Cherono of Kenya in 2:18:11. Kipchoge is regarded as one of the greatest marathon runners of all time.

He won the London Marathon for a third time earlier this year and is the Olympic champion over the distance.